Beginner’s Lessons start each year in March and finish mid June.  The Mount Maunganui club will be holding lessons at the same time so that beginner's can pick and choose which lesson they attend - Tauranga on Tuesday or the Mount on Thursday.    On completion of lessons, beginners will then be able to play at either club for the remainder of the year.  The options for beginners at Tauranga are social bridge on Thursday afternoons, learner’s bridge on Tuesday evenings and junior bridge on Wednesday evenings.  Please contact Mike (021 118 1294) or the club office (07 576 5022) for further information.  Click here to listen to the radio advert for lessons

What is this game called Bridge ?

Bridge is a game a little like Five Hundred, and is derived from a card game called Whist.  It involves two partnerships playing against each other to win tricks and gain points.

Once a pair has nominated a contract, they will try to take the required number of tricks.  The other side, known as the defenders, will attempt to defeat the contract.

The language of Bridge is rich in colloquialisms, including terms such as The Beer Card, Duck, Finesse, Hook, Kibitzer, Sacrifice, Squeeze and Stiff.

At the end of each session of Bridge, your scores are compared with the scores of the other players.  The luck of being dealt 'good' hands is therefore removed.  Other players will have the same cards as you - it is therefore a comparison of how well you did with the cards that matters.

Improvers Classes. Play and talk sessions to be held the first Tuesday of every month, starting April. The first three will be held at the Mount.  Anyone welcome including players from other clubs. 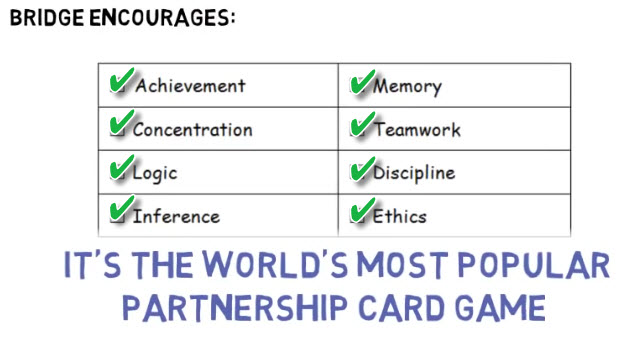 Please be seated 15 minutes before the start of play