7 committed members met, on a very rainy afternoon, to discuss the hands of the day. Today’s hands were often quite distributional, and a number of slam contracts were possible. We discussed several of them, with some “bidding tricks” along the way:-

There were other slams, but we generally thought #1 and #10 too hard to bid.

We did discuss the bidding on hand #7. South has an interesting hand and could justify passing, opening with 1C, or pre-empting with 3C. We thought the latter the best (yes, we sometimes pre-empt at the 3 level with 6 of a minor!). North then has a pretty easy 3NT bid, which makes. 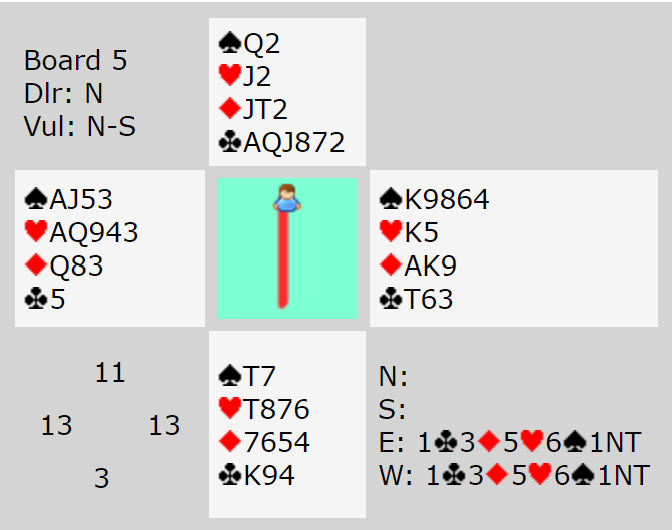 Yes, North could open 1C, making things harder, but E/W should still get to slam. If North opens 3C (see above), it is definitely harder…but N/S are vulnerable…let’s keep it simple – East opens 1S…whatis West’s bid? In one bid, 4C, a splinter, West describes the hand accurately – a “splinter” is an unnecessary jump, and shows 4 things all at once: (a) 4+ card trump support, (b) a singleton or void in the splinter suit, in this case Clubs, (c) points for game, and (d) some interest in exploring slam.

East accepts the challenge and starts cue-bidding (by arrangement, some pairs cue bid only first round control {ace or void}, and some cue bid either first or second round control {A, K, void or singleton})….so…East bids 4D, West bids 4H, and East bids 4NT (RKCB in spades). West replies 5H, which shows 2 key cards, but denies the QS.

East knows his/her contract may depend on a 2-2 drop in trumps, but is encouraged by the fact partner’s points must be mainly in the 3 suits (s)he is interested in…6S is bid, the QS drops and another slam is made!

To review the hand records for the session on Tuesday 5 July 2022 ... click here